The “Morning Star of the Reformation,” John Wycliffe (ca. 1320-1384) was a contemporary of the “Babylonish Captivity,” Geoffrey Chaucer, and John of Gaunt. In his recoil from the spiritual apathy and moral degeneracy of the clergy, Wycliffe was thrust into the limelight as an opponent to the papacy.  The readiest key to Wycliffe’s career is to be found in the conviction, a conviction which grew deeper as life went on, that the Papal claims are incompatible with what he felt to be the moral truth of things, incompatible with his instinct of patriotism, and finally, with the paramount authority of the inspired Book which was his spiritual Great Charter.  He seems to have become one of the king’s chaplains about 1366, and became a doctor of theology in 1372, before being sent to in 1374 to negotiate peace and meet with papal authorities in the matter of filling ecclesiastical appointments in . Upon his return to he began to speak as a religious reformer and issued nineteen articles in 1377, which resulted in the issuance of five papal bulls against him. In 1382 he denied the doctrine of transubstantiation and was relieved of his teaching duties at , but he was permitted to retire to his parsonage at Lutterworth, where he died on , in communion with the church.  No major Christian persecutions took place between Constantine and Wycliffe.  Wycliffe's body was exhumed and burned some 41 years after his death. 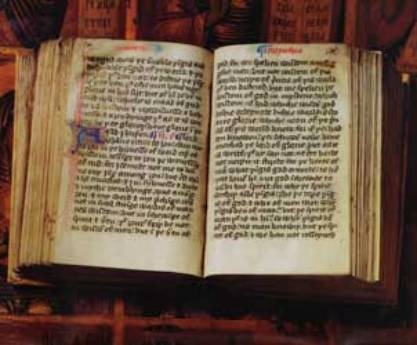 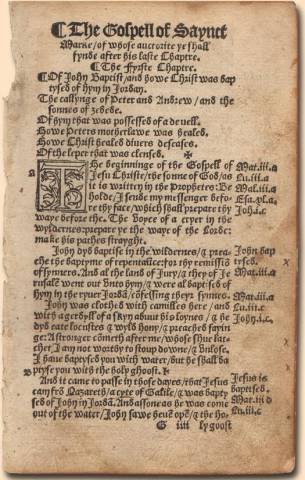 Wycliffe cast aside his dry scholastic Latin to appeal to the English people at large in their common language. That appeal was primarily through the Lollards, an order of itinerant preachers, “poor priests,” who went throughout the countryside preaching, reading, and teaching the English Bible. Toward the close of the fourteenth century the great Wycliffite translations of the Bible were made. The New Testament (1380) and Old Testament (1388) translations associated with him formed a new epoch in the history of the Bible in . They were translated from contemporary manuscripts of the Latin Vulgate, with the probability that the translator(s) followed the principles of translation set forth in The English Hexapla, which makes the following observation:  In translating from the Vulgate, Wycliffe has most faithfully adhered to that version; he seems to have adopted Hampole’s principle: In this work y seke no straunge englishe, bot esieste and communeste, and siche that is moost luche to the latyne, so that thei that knoweth not the latyne by the englishe may come to many latyne words.  He adhered to this principle to such an extent that “the earlier Wycliffite version is an extremely literal rendering of the Latin original. Latin constructions and Latin word-order are preserved even where they conflict with the English idiom.”  Although this Wycliffite version is attributed to John Wycliffe, it must be noted that the work was completed after his death by Nicholas of Hereford. The translation was based on poor Latin manuscripts, and was circulated by the Lollards, who were the followers of Wycliffe and the anti-clerical party in the church. (Geisler, N. L., & Nix, W. E., A General Introduction to the Bible).

The Catholic Reformation (ca. 100 years before Prot. Reformation) was about the 1) Internalization of Christianity, and 2) Intoleration of Abuses.

As a student of Wyclyffe, John Hus began to understand the supremacy of scripture (1400).  Bethlehem Church is where John Foxe asserted Huss "seemed rather willing to teach the Gospel of Christ than the traditions of bishops," and was accused of being a heretic (John Foxe, Foxe's Book of Martyrs, (Springdale, Pennsylvania:  Whitaker House, 1981), pp. 90-91). 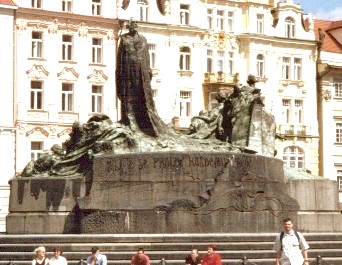 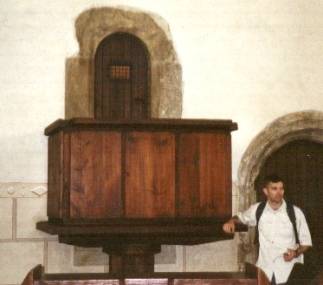 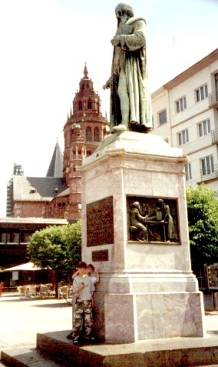 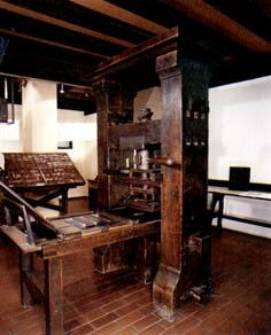 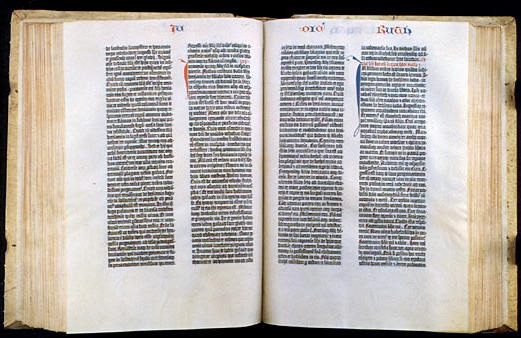 One of the most important inventions that brought the world out of it's long sleep was the printing press.  Johann Gutenberg (1397-1468) has been long credited with the invention of a method of printing from movable type, including the use of metal molds and alloys, a special press, and oil-based inks.  His method (while refined and further mechanized) remained the principal means of printing until the late 20th century.  He printed the first book, which happened to be the Bible. 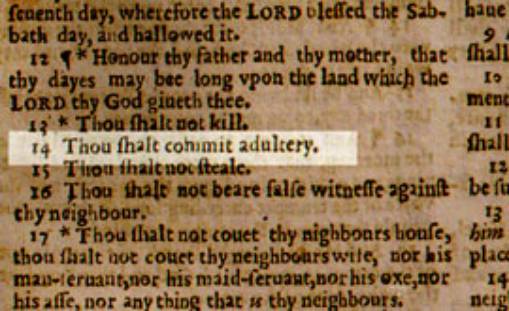 Excerpt from the "Wicked Bible"

A series of events, beginning with a power struggle, kicked off the English reformation.  Henry VIII (1509) wanted a break from Papal authority, not a Protestant Reformation.  It was not that King Henry VIII had a change of conscience regarding publishing the Bible in English. His motives were more sinister.  But the Lord sometimes uses the evil intentions of men to bring about His glory. King Henry VIII had, in fact, requested that the Pope permit him to divorce his wife (Catherine, with whom he had Mary, who would later become Queen) and marry his mistress (Anne Boleyn, with whom he would later have , and who would also later become Queen). The Pope refused, and King Henry responded by divorcing Catherine, marrying Anne, and thumbing his nose at the Pope by renouncing Roman Catholicism, taking England out from under Rome’s religious control, and declaring himself as the reigning head of State to also be the new head of the Church. This new branch of the Christian Church, neither Roman Catholic nor truly Protestant, became known as the Anglican Church or the Church of England. King Henry acted essentially as its “Pope.” His first act was to further defy the wishes of by funding the printing of the scriptures in English--the first legal English Bible--just for spite.  Mary Tudor married Phillip II (son of Charles V), which sparked a short-lived English counter-reformation.  The means that Mary used to pursue her aims earned her the nickname "bloody Mary.” There were 283 Protestant martyrs burnt at the stake in her reign. Among the martyrs were Cranmer (Archbishop of Canterbury), Ridley (Bishop of London) and Latimer (a leading preacher).  John Foxe was one of those who fled England during Mary's reign.  Mary’s half sister, Elizabeth I, assured Protestant victory in .  Under her rule was ushered in the .  She named James I to the throne in 1603 (who would later commission the Authorized Version of the Bible, otherwise known as the King James Version).  The printers of the “Wicked Bible” were fined 300 pounds sterling for their terrible typographical error in printing the Ten Commandments, omitting the all-important word “not” and rendering the verse as, “Thou shalt commit adultery.”  The lot of 1,000 copies was ordered destroyed.  Only a handful escaped destruction, making them the rarest of rare.

Martin Luther, having read Romans 1:17, realized that no one could please God without faith alone--sola fide.  Having posted his Ninety-Five Theses on the door at (), he went to (1530) and made his case. 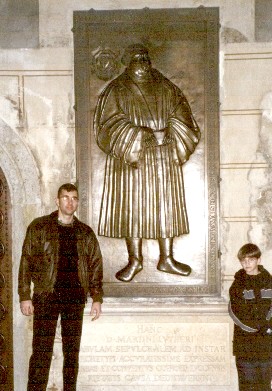 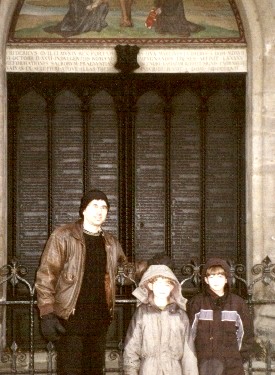 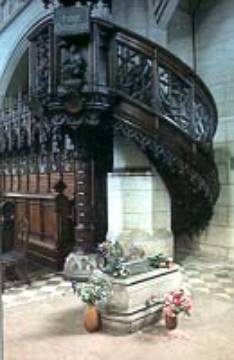 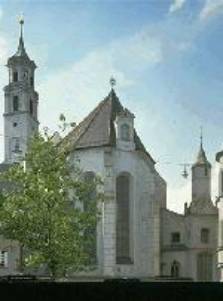 As the humanities flourished, Desiderius Erasmus and others began to assemble New Testament manuscripts in order to develop a standardized Greek New Testament. 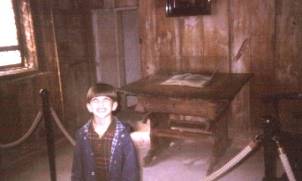 Luther later translated the Greek New Testament into his native language, German.  This marked the first time a translation was made from the originals into the language of the common people since Jerome's translation to Latin (400 CE).  Luther, having learned New Testament Greek from his friend Melanchthon, accomplished this task while hiding out at Wartburg, where he remained until 1522.  He used Erasmus' GNT.

Ulrich Zwingli led the reformation in .  In October 1529, Philip Melanchthon (who developed the idea of justification as meaning "declared" righteous) invited both Luther and Zwingli to his castle in to hash out their differences.  Zwingli stayed at on his way there.  The two men had very little in common, and their discussions ended in failure.  Luther thought Zwingli to be a religious fanatic who had lost touch with common sense and spirituality.  Zwingli thought Luther to be hopelessly enmeshed in unsupportable Catholic doctrine. 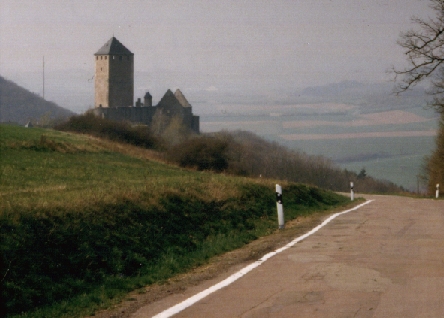 History (YOU ARE HERE)